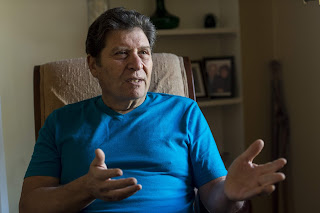 Posted by Paul Epstein at 9:18 AM No comments:

I wrote the following in response to an op-ed in the Charleston Gazette Mail by David Yaussy, Feb 21. My response appeared in CGM on March 1
Predictably, a contributing columnist who represents the fossil fuel industry doesn’t find much to like in proposals like House Resolution 763, the Energy Innovation and Carbon Dividend Act. The columnist dismisses it as a “carbon tax” that will deprive the poor of heat for their homes and gas for their cars.

But contrary to the column that appeared on the Daily Mail Opinion page on Feb. 22 (A cure worse than the disease, David Yaussy), the carbon fee and dividend approach to transitioning from fossil fuels like coal, gas, and oil to non-polluting renewable energy is a bipartisan, market based plan that recognizes the true cost of continuing to release greenhouse gases into the atmosphere and prices them accordingly.

Rather than waste time debunking the columnist's speculations about why a carbon fee might not work, why don’t we for once listen to the experts? In a letter published in the Wall Street Journal on Jan. 7, forty-five top economists from both parties, including former Fed chairs Alan Greenspan, Ben Bernanke, and Janet Yellen, called for a carbon tax and dividend approach.

Greg Mankiw, who chaired the Council of Economic Advisors under President George W. Bush wrote, "a carbon tax together with rebates is, in some sense, the most conservative way to deal with climate change."

Fees collected at the mine, the pump, or at our borders will be returned to American households, which will enable them to transition to cleaner forms of energy. Energy companies are already planning for this future as they shut down coal plants, open natural gas powered plants, build wind and solar farms and utilize geothermal resources. Innovations in battery technology and pump storage (pumping water uphill to be released when needed to turn turbines) are already making alternative energy scalable, and some countries, like Iceland, Sweden, and Costa Rica plan for 100 percent renewables in a few decades.

In all likelihood, this will speed the pace of a reduction of coal mining because coal will become more expensive. That is, unless new technology solves the problem of making carbon sequestration cost-effective and helps keep coal, oil, and gas competitive with non-carbon based solutions.

This is exactly the kind of approach that will unleash the forces of capitalism and the entrepreneurial spirit to slow or stop the warming of our planet. Climate change is already causing hundreds of billions of dollars in damage annually due to massive storms, droughts, fires, illnesses, and movements of populations.

Mr. Yaussy properly attributes the proposed legislation to Citizens Climate Lobby, a national organization that has been organizing volunteers to push Congress to pass this bipartisan solution for a decade.

In West Virginia, local volunteers are working to help their fellow citizens understand the facts about climate change and HR 763. We are also working with Citizens Climate Lobby groups in other coal producing states to propose a “carve out” of some of the fees collected to help affected communities.

Learn more at citizensclimatelobby.org or come to one of our monthly meetings at the West Virginia State University Economic Development Center, 1506 Kanawha Boulevard West, at noon on the second Saturday of every month.
Posted by Paul Epstein at 4:47 PM No comments: