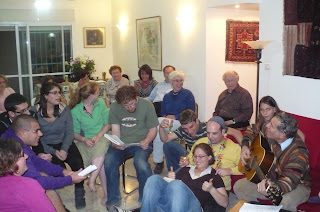 Included in the singing group for the reception would be David, Rina, Avital, David’s ex-wife, Judy, and her husband, Mencher, who plays guitar and ukulele, and me. David nominated “Teach Your Children” or "Over the Rainbow" as songs that would best express the moment, but Menscher thought Dylan’s “Forever Young” would fit the bill better. Rina didn’t seem terribly happy with either, and after half-heartedly singing the first two for the benefit of any who didn’t know them we devolved into an impasse, trying to come up with a perfect song to express complicated ideas like Raya and Michael’s love, Jewishness (Dylan is Jewish), and support of family. Raya started strumming a song and singing in Hebrew. It was a song she’d written, very simple, beautiful and powerful, with words that spoke of love of place, and the Hebrew words used allowed the metaphor to extend to love of God. Rough summary translation: Allow my legs to walk to the place that my heart loves and open my heart to the place that to which my legs have taken me. After one run-through we knew it was the perfect song for us. We decided on arrangement, harmonies, and within an hour had it ready. My brother wrote down the words phonetically for me, since it’s been years since I tried to read Hebrew. Then I asked Rina if she’d mind if for this occasion I tried to come up with an English version that would more directly express the romantic love between Raya and Michael. She said to give it a shot.
The wedding itself was magnificent. I don’t know for sure in what ways it was typical and in what ways it was innovative, but suffice it to say that before the official ceremony even began we’d been eating, drinking, dancing, and singing for almost two hours. The ceremony itself beautifully wove a variety of music and traditions together. Though several rabbis participated in the ceremony in various ways (Raya’s grandfather on her mother’s side is a Rabbi from the ), it was M.C.’d by Yoni, who wore a headset microphone and translated some of the proceedings. Translations and descriptions of the proceedings had been provided in a program for English and Spanish speakers. And the party and dancing afterwards was so exuberant that I am sure is currently experiencing a shortage of Advil.
(this is part 1 of what will be a 2 part post; part 2 coming next week)
Posted by Paul Epstein at 4:26 PM No comments: 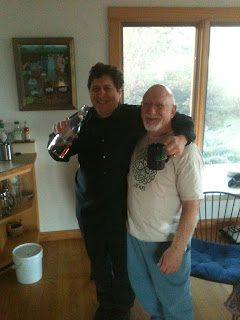 Last weekend for the first time I can remember I had whiskey before breakfast. I’ve played the fiddle tune a thousand or more times, “Whiskey Before Breakfast.” I always assumed it was traditional Appalachian, a variation of Silver Spire, the Irish Reel, but a little Internet searching brought a link that attributes it to a Canadian fiddler, Andy de Jarlis. I think I first heard it from the Red Clay Ramblers, who were from Chapel Hill, NC. Mike Cross, a great solo entertainer from there wrote lyrics to it and recorded it. It’s a great song. The point is, aside from a couple very late nights jamming in the mid ‘70’s when I may have had a nip or two as the sun was rising, I don’t remember ever waking up and having a sip of whiskey before breakfast. I mean, it’s only been the last ten years or so that I developed a taste for bourbon, and the last three that I discovered single malt scotch. For me, one drink in the evening is enough.
But staying with Stephen Stiebel outside Chapel Hill, NC last weekend, I decided it was the right time and place to end this oversight. Stephen is one of the most interesting people I’ve met in the ten years or so I’ve been meeting interesting people in the contra dance world playing with the Contrarians. I realize that some of the other very interesting people, like Warren Doyle, who has hiked the length of the Appalachian Trail more than any other living human; Penelope Weinberger, who has a life sized sculpture of a skeletal “burning man” attached to a propane tank for night time entertainment in her backyard and goes to the Burning Man festival every year; David Wiley, who I think of as “the unofficial mayor of Jonesborough, TN”, a tireless producer and promoter of contradance events in and around Jonesborough; or Harriet Bugel, who has combined her talents as a caterer and love of contra dance to develop a business providing meals and snacks at contra dance weekends might feel slighted, but hey, for all the wonderful things they do, they don’t make really good bourbon like Stephen does. He also built a house a few years ago with a kitchen/living room area big enough for 40 people to contra dance in, and has house concerts and dances there regularly. He runs a successful business building custom windows and doors.
But, did I say he makes really good homemade bourbon? As in, he has a still? It’s all legal. He doesn’t sell it. Mostly he shares it with friends. Contra dancers aren’t known for their heavy drinking, but I saw a few bottles get pretty badly dented the night of the Contrarians house concert and dance. So, here’s to Stephen: may he long enjoy good health, great friends, wonderful music, excellent contra dancing, and an occasional glass of whiskey before breakfast!
Posted by Paul Epstein at 8:49 PM 1 comment: