This IS Who We Are (at least some of us) 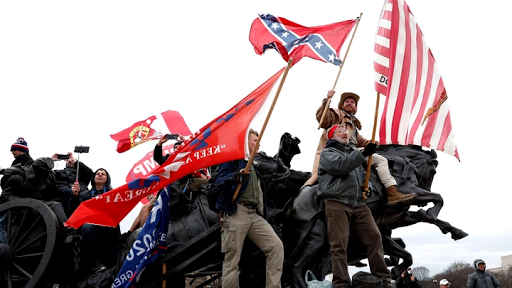 Fellow West Virginians, we have come through four years of a presidency that forced us to take positions that starkly shine light on differences in our beliefs, derived from sets of so-called facts that describe our world in starkly different ways and lead us to see it, each other, and the possibilities for what lies ahead in profoundly different ways.

High falutin’ language? I must be a Yankee, or a college man, maybe even a lawyer or a Jew. Guilty on 3 counts. Born and raised in Pennsylvania, but I lived in WV—on 17 acres in Roane County— for 18 years until 1992, and in Charleston since then. Despite the fact that I’ve lived here longer than most born and raised here, I am not considered a West Virginian by many. As to Jewishness, yes, by birth, though I do not practice any religion, preferring to live my life following what I consider basic human morality: honesty, helpfulness, loving and forgiving as much as possible.

I attended WVSU (College, then) and Marshall University (COGS, then) as a young working parent, completing undergraduate and graduate degrees in elementary education. I taught at Clendenin Elementary school for 7 years and Ruffner Elementary in Charleston for 18 years. I was a founding member and first president of FOOTMAD, the Friends of Old Time Music and Dance, and have played traditional WV string band music and other styles in bands all over the East and Midwest, and many years ago in Greece and Turkey on a U.S.O. tour where I remember meeting a young soldier on an island off the coast of Greece at a satellite communications site who grew up a couple miles from where my wife and I were raising a baby and growing vegetables.

When we meet on the street, we say howdy, talk about the weather, our families, our health, and the state of the roads. But if we veer into politics or the news, it’s not long before our conversation may become suspicious or angry. Each person makes statements about the facts that they believe and the sources where they get them. The facts don’t agree, and my sources, which are usually called the “mainstream media,” are called fake news by the other, while his or her sources are usually a website, a friend, neighbor, or family neighbor they know, or one of a few cable news networks they trust.

That is the end of the conversation for me. At that point, I say, “It’s been great seeing you and I’m glad you told me what you think, but if we can’t agree on what sources can provide trusted facts, then there’s really no way we can have a productive discussion.”

I have learned this lesson online. I often post what I consider articles from trusted sources to counter what I consider falsehoods or articles that make unlikely or wrong conclusions based on known facts. I do that even though I know I won’t change the mind of people making false claims. I hope someone who isn’t so steeped in alt-beliefs will be exposed to another view.

Senator Shelley Moore Capito, among others including Joe Biden, has described the 1/6/21 attack on the Capitol as “not who we are.” While I’m glad Capito is willing to call out violence against the Capitol where she was briefly in danger, that IS who some of us are. Despite our mostly white, rural demographic, West Virginians include a multitude of kinds of people who believe in multiple things. I think that Shelley would agree that many, if not all, of those who entered the Capitol acted deplorably. Many wore or carried symbols associating them with far right groups, including Proud Boys, KKK, Nazis, the Confederacy. The group included racists, women haters, terrorists, and people who want to destroy United States government and remake it in their own image. Only a few West Virginians may behave that deplorably, though we elected a state representative who was among them and a president who incited them.

So it’s time to acknowledge who we are and talk about who we want us to be. How can we educate, or “deprogram” or change minds of those who have deplorable beliefs if we just tell people they are not us—they are “Other?” Accepting who they are does not mean we don’t ask them to change. When an evangelical Christian meets a non believer who they believe will go to hell, they presumably don’t call for them to be locked up or banished. They invite them in, offer food, companionship, love, and song, hoping to persuade them their way is better. They acknowledge they’re not perfect, “We are all sinners,” they say. Well, maybe it’s time to take a page from them.

In West Virginia, almost 70% voted for Donald Trump this year. Who are they? They are us.

But they have been told by media they consume and their political leadership, repeated by friends and family, many of the following lies:

Liberal and Progressive Democrats are Socialists or Communists

Most Democrats accept some ideas that Socialists have, such as government sponsored health care, Democrats don’t want government to take over factories and ban private ownership.

Liberal and Progressive Democrats want to defund the police.

Few Democrats use this phrase. Most who do mean that they believe police are expected to solve too many problems they’re not suited for, like mental health problems and homelessness—programs that need better funding, and some of the funding could come from police departments relieved of those burdens.

Liberal and Progressive Democrats want to take away our guns

Many Democrats support laws to improve gun safety such as requiring background checks, doing away with loopholes, banning large clips and/or assault weapons only useful for killing people.

Millions of people have gained insurance and affordable health care under Medicare, Medicaid, CHIP, and the Affordable Care Act-Obamacare. Republicans have fought these programs and tried to destroy them. Their philosophy is that people are responsible for their own health, and should spend their own money on their health when they get sick.

Liberal and Progressive Democrats are anti-coal.

Democrats believe that all workers deserve safe working environments and pay that can support a family. They support coal miners in forming unions to fight for safety and good pay. Coal companies must be held liable for the damage that coal mining and coal burning do to our environment. If Coal companies cannot produce and use coal safely and cleanly compared to other forms of energy, they will go out of business. We must insist they pay to clean up their messes. We must help workers losing jobs in coal industries to learn and find good paying jobs to replace those lost to cleaner, more affordable energy.

Liberal and Progressive Democrats kill babies. They are pro-abortion

Almost no one is "pro-abortion". Democrats acknowledge that not every pregnancy is viable, safe, or healthy. Many pregnancies result in unavoidable miscarriages, which is often painful and disappointing to the woman, and perhaps her partner. Some pregnancies must be forced to be miscarried--aborted--to protect the life or health of the woman. Some pregnancies, especially those caused by rape or incest, or perpetrated on underage girls as young as nine or ten are dangerous to the mental state of women forced to carry a fetus to term. A "pro-life" position should consider these issues and "pro-choice" proponents believe women should make these decisions in consultation with their doctor.

The Q-anon conspiracy is a dangerous fantasy. People sometimes believe literally any whacky idea made up and promoted on the Internet. Like an addiction to drugs, sex, gambling, or membership in gangs, militias, or cults, belief in conspiracy theories like this give people a high and creates a community that supports each other’s ideas.

I’m doing the easy work of defining problems. We need people to solve problems. Howard Swint (who contributes op-eds to the WV Gazette-Mail), recently reached out to me to suggest we form a diverse group of West Virginians to travel around talking to people who have not met many people different than themselves to talk and get to know one another. I told him that after I got my vaccination, I would consider doing that.