The big difference, of course, is in the day to which I refer I was young and alternately idealistic and fatalistic. And now I’m old(er) and….well, I guess not that much has changed. Back then I had to constantly figure out how I was going to make a living, though actually my goal as a hippie was not to have to make a living, but live off the land, or at least off the easy pickings of a wealthy and wasteful society.

After graduating high school and spending one semester in college, I hit the road with my girlfriend (my “old lady” in the parlance of the day). I had briefly flirted with the idea of political activism against the Vietnam War, but after being pepper gassed during the November 1969 Moratorium to End the War in Vietnam march in D.C., I decided that being anti-war was too dangerous. I had already “turned on and tuned in,” but now I dropped out. After some hitchhiking adventures, we landed in rural central Maine in ‘71. I built a cabin out of poles and scrap lumber and lived off the grid—hauling water, chopping firewood, using kerosene lamps. I read a lot and I got a guitar and learned to play. As much as I hated to, I learned how to keep a car running, because I could only afford junkers that needed to be tinkered with every other day. I even rebuilt an engine. We were living off a couple thousand dollars saved over my childhood from what was supposed to be a college savings account. 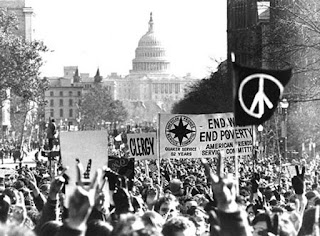 As the money began to run out, we found some odd jobs, and then I joined a bluegrass band playing bass. I’d never played bass before that, but she had, in high school, and she showed me the basics after we retrieved it from her parents’ house in Virginia. We spent three years surviving Maine winters before moving to the much more hospitable (though no less rural and poor) climate of West Virginia, where I still live, though now I live in town.

So now, in retirement again (I always called that period of time my early retirement…), I have time to pursue whatever interests I wish without worrying about where the money for food, shelter, and transportation will come from. When I first retired, four years ago, I thought I’d read, play music, and go contra dancing more, which I’ve done, though not as much as I thought I would. After the poisoning of our water system in Charleston, WV in January, 2014, I turned to environmental activism, vowing to raise money to support state efforts to end mountaintop removal coal mining, a big polluter of the state’s water, air, and destroyer of land. I found fundraising frustrating and not how I wanted to spend my retirement and after about six months work, during which I raised about $5,000, I put that to bed, joined with some people working on climate change issues (after all, stop burning coal, and the mines will close), and cut back on my commitment of time. In the interminable 2016 election season, I spent much too much time reading about it, watching cable news, and arguing with people on Facebook (mostly with progressives who I tried to convince to stop slamming Hillary).

Now, as a dangerous man has taken over our government with the help of a once decent political party that has become deplorable, I’m ready to drop out again (not into turning on anymore, and was never sure what it meant to tune in). My wife is off in Colorado for the winter where she is helping care for two grandchildren under 3 years old. I find myself reading more, watching entertainment TV (Netflix and PBS) rather than news. More and more, I’m turning to music (though I’m also going off to contra dance weekends). I play my fiddle every day, working on refining a few tunes to play in contests. But I’m also singing and playing guitar more. I’ve been attending a small weekly acoustic jam session and taking a bluegrass songbook along. I still play in a band, the Contrarians, which plays occasionally for contra dances, mostly in the southern Appalachians, and I write instrumental music for that. Sometimes I write a new song or tinker with an old one. I bought a small camper, which I’m planning to drive to Florida for the month of January, where I’ll also attend a couple contra dance weekends. I spend at least an hour almost every day working out (in summer, riding my bike, now at the Y). Oh, and I’m making an effort to learn Spanish. Maybe I can practice in Florida.

I thought when I started writing this that I might have some words of wisdom, but I’m not sure I do. I know that resistance and political activism is important. I know that if Trump turns out to actually be Hitler, I may have to live (or die) with the guilt that I did not do everything I could to stop him. But, I suppose I am still the child of the sixties I was in my youth: somewhat entitled, self involved, more into self-actualization than self-sacrifice. I did spend almost thirty-five years in the workforce as a social worker and an elementary school teacher. It’s hard to know the impact I made, but I worked hard with kids who needed a lot of help. This year, in addition to my state teacher’s pension, I’m eligible for Medicare. I plan to begin taking Social Security in 2018. Of course, if they mess with my retirement, I’ll be ready to march on Washington again. I dare them to gas an old man like me!
Posted by Paul Epstein at 5:07 AM No comments: