Is Manchin afraid to Destroy our Democracy or Save It? 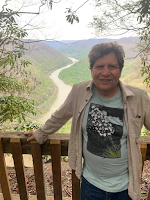 To many of my progressive friends, Senator Manchin might as well be Republican. In 1968, I was a “radical” who distrusted politicians. Hubert Humphrey ran against Nixon, Republican. Neither promised a quick end to the Vietnam War. They were “part of the problem, not part of the solution.” Then Nixon claimed he had a secret peace plan and won. There was at least one difference between them: Nixon was a liar.

To progressives, Manchin and Republicans are complicit in supporting fossil fuel companies and obstructing policies to reduce fossil fuel use and transition to low carbon alternatives to slow global warming. His refusal to reform or eliminate the filibuster is support of a corporatist anti-democracy agenda. When he votes with Democrats, as he does unless a vote with Republicans would change the outcome, that does not mollify them.

Manchin wants to protect power the Senate gives him in the Constitution. WV, with a population of under two million gets 2 Senators. CA, with 20 times the population gets only 2 Senators. At our founding, most low population states were southern and interested in protecting slavery. Manchin wrongly conflates this advantage with the filibuster (it’s not a law, but a Senate tradition). The filibuster has changed form since first used in the 1830’s. It allows the minority party to stop bills and presidential appointments from proceeding to a final vote. In other words, it stymies majority rule.

Republicans created a huge backlog of judges and cabinet members during the Obama administration by threatening filibusters. The mere threat now accomplishes what used to require Senators to speak without break for hours.  To break the backlog, Democrats exempted appointments of federal judges and cabinet appointees from the filibuster in 2013. When Republicans regained the presidency and the Senate in 2016, Republicans changed the filibuster rule to allow Supreme Court justices to be confirmed by simple majority. Without that change, they likely would not have been able to install arch conservatives like Kavanaugh and Amy Barrett.

Previously, appointments were mostly non-partisan exercises in which presidents were given their picks absent egregious misconduct or radical philosophy. Members of both parties agreed presidents were entitled to their choices with Constitutionally mandated advice and consent of Senators.

The election of an African American president spawned the “Tea Party” movement whose underlying racism was obscured by talk of higher taxes and deficits. Manchin entered the Senate in 2010 as Republicans were perfecting obstruction. While claiming bipartisan intentions, they negotiated for changes in bills, then voted against them or invoked the filibuster to keep President Obama from succeeding in improving the economy and people’s lives.

Manchin fears that if Democrats reform the filibuster, the next time Republicans gain control of Congress and the Presidency, they will abolish it so they can roll back Democrat passed bills—maybe even the Affordable Care Act, Medicare, or Social Security. He believes that would lead to the end of our democracy.

What he has wrong is that bipartisanship has run in only one direction for at least the last 12 years since Obama’s election. Mostly white rural states have been steadily moving into the red column where they have outsized power in the Senate.

Republicans also consolidate power through gerrymandering— drawing Congressional districts to give them advantage in the House of Representatives and state legislatures. They pass state laws to suppress voting among young and non-white Democrats.  In the 2020 election, which the former president has yet to concede, if the more radical elements of the Republican Party had its way, the election would have been awarded to Trump by the electoral college, state legislatures, or even by Congress itself. Overturning a free and fair election as Trump, his lawyers, and the insurrectionists of January 6 tried to do is by definition an attempt to destroy our democracy.

If Senator Manchin is truly concerned about our democracy, he should be willing to do whatever it takes, including reforming the filibuster to insure the passage of the For the People Act, which ends gerrymandering in favor of non-partisan Congressional redistricting and makes voting easier.  The John Lewis Act should be passed immediately. It would allow the Justice Department to intervene in state laws that unConstitutionally affect minority voting rights.

Manchin is in a tough spot. He could agree to reform the filibuster, but he’s claimed that would destroy our democracy. He hoped that his Republican colleagues would show that they are still capable of bipartisan action. Instead, they are showing us the same playbook they used to stymie President Obama—obstruction, obstruction, obstruction. It’s time for Joe Manchin to do the right thing. Yes, West Virginia’s Trump base and the big money that buys ads will demonize him. They will do that no matter what. It’s time for Joe to prove my progressive friends wrong, help reform the filibuster and clear the way for Congress and President Biden to save our democracy.

Posted by Paul Epstein at 7:01 AM No comments: