Mr. Trump, Build that Wall! (around your business empire)

You have apparently won the presidential election by winning more electoral votes than your opponent while losing the popular vote by over 2%. As of now only 46% of voters have chosen you. Before the election, it was widely reported that you were one of the most distrusted presidential candidates ever to run for office as the nominee of a major party, and many who voted for you have said they did so despite their distrust. 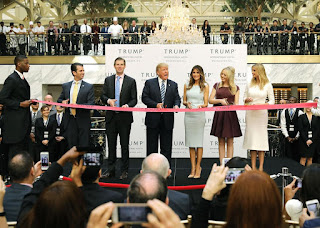 It is not surprising that you would feel appreciative to those who supported you during your campaign and want to fulfill your promises to them. However, every elected official in a Democracy has a responsibility to his constituents whether they voted for him or not. In this case, those of us who did not vote for you should not have to point out that we outnumber those who did and are deserving of a president who will work for us honestly.

We know that there is controversy over just what is required under the laws of the United States to meet the ethical and legal standards for a president to avoid a conflict of interest. Given the distrust the majority of the American people have for you, it would be in your best interest and the best interest of the country for you to err on the side of caution in avoiding even the appearance of such a conflict. Turning your business over to your children does not do that. Nor will it protect your from violating the Emoluments clause of the Constitution which prohibits you from accepting foreign gifts. Benefits and favors from foreign and domestic interests, whether you seek them or approve of them or not, are likely to come to the businesses your children run in your absence, and will benefit them now and you when you no longer serve. This is unacceptable, and will likely embroil the country in a Constitutional crisis as legal challenges are made to this arrangement.

When you decided to run for president, you decided to enter public service. People who enter public, or government service, make sacrifices and willingly give up careers in the private sector that could earn them far more than a government salary. Yet they willingly do so, some even considering it a patriotic duty. It is time for you to make the sacrifice you signed up for. Ideally, you would sell your businesses or immediately put them up for sale. Other very smart people, including Andrew Ross Sorkin have put forward other proposals short of that, such as hiring a “ ‘corporate monitor,’ an independent overseer with unfettered access to your organizations who will provide regular reports to the public about any possible instances of conflicts.” The Economist magazine goes a step farther, recommending you “must ring-fence (your) private interests and put them under independent supervision.”

Many of those who did not vote for you have serious concerns about your lack of experience and basic ability to competently fulfill your duties of president. Your behavior in the past and in the present, such as your dishonest and incendiary Tweeting, continues to cause us concern. Yet, as President Obama exhorted us to do, we hope for your success as President, by which I mean accomplishing things that are good for the country and all of its people. Do yourself a favor and take this issue, an issue which could easily lead to an early end to your presidency, off the table. Do it now, before you take the oath of office.