Israel and Palestine: It's Complicated

Seriously, it is complicated, and I know if I try to explain it, some people will want to tell me how wrong I am or ill informed or biased, and they’ll probably be right. My reasons for writing about it are as much to explore my understandings and what I’ve learned over the last week, or more specifically during a “joint narrative” tour in the city of Hebron in the West Bank, a part of, depending on your point of view, the “occupied territories” or “liberated Judea” or simply Palestine, all terms used by people during our tour.

The full day tour was arranged by Abraham Tours, which runs hostels in Jerusalem, Tel Aviv, and Nazareth, and arranges tours in Israel, Jordan, and Egypt. “Our unique Hebron Dual Narrative Tour is renowned for exploring both perspectives and narratives of the complex Israeli-Palestinian conflict, in one of the most volatile and divided cities in the Middle East.” Hebron, a city of historical significance to Jews 2nd only to Jerusalem according to our Jewish tour guide, was the first area in the West Bank to be targeted by settlers after the 6 Day War, and has been a flash point ever since. 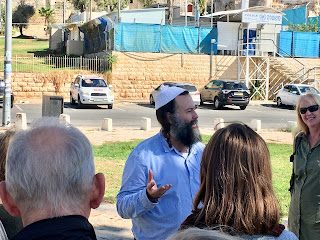 The overall tour was led by an Orthodox Jewish American-Israeli from “the free state of Berkeley, CA” as he liked to say, who is now an Israeli citizen with an Israeli wife and three children. He lives in Israel an hour or so from Jerusalem. My brother and sister-in-law, both Israeli citizens who know of him, described him as left wing, by which I think they mean he opposes the settler movement and believes in “land for peace” and the possibility of a two state solution. But I got the impression during the tour that he was “settler friendly.” It may be because he was tasked with presenting the settlers’ viewpoint that he put aside his own viewpoint during his part of the tour. A Muslim Palestinian woman named Lena presented the viewpoint of the Arab population.

But perhaps I’ve already left some of you behind, so a brief explanation of what I think I know about the origins of the Israeli-Palestinian conflict. I welcome you to search and read on your own to gain a deeper understanding, and caution you that as I say above, I’m no expert.

The Nation of Israel was established in 1949 after a UN partition plan was rejected by Arab Palestinians and the Arab countries. A Zionist movement, that is an effort to encourage Jews to immigrate and settle, had been going on since the early 1900’s, and increased with a wave of refugees after WWII. The Jews declared an Independent state of Israel, the Arabs declared war, and the new nation managed to fight the surrounding countries of  Egypt, Jordan, Syria, and Iraq (and contingents from other Arab nations) to a standstill. The UN helped broker a cease fire. Temporary borders were established through the middle of Jerusalem. Jordan annexed the West Bank of the Jordan river, and Egypt claimed Gaza and the Sinai Peninsula. The Arabs who lived in or fled to those areas during the conflict were considered refugees and not offered citizenship in the other Arab nations. They or their offspring remain in that stateless status today. The Arabs who remained in Israel became citizens of Israel. 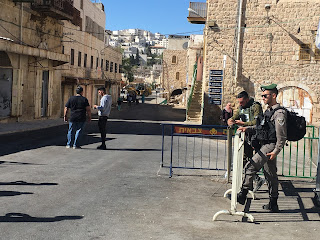 In 1967, during the “6 Day War” Israel gained territory in Gaza and the Sinai on their border with Egypt, the West Bank on the border with Jordan, and the Golan Heights from Syria. Egypt later negotiated peace and Israel returned their territory in Sinai, though Gaza remains an area of Palestinian control and Jordan gave up their claim to the West Bank, which is now governed by the Palestinian Authority, though Israel maintains a military presence and controls the borders. 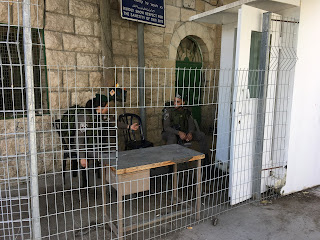 I find that I can’t adequately summarize the history of the conflict—suffice to say that there has always been violence: attacks, repression, counterattacks, and in addition to the armed conflicts that have broken out between Arab nations that have not recognized Israel and remain in an official state of war, there has been terrorism around the world and in Israel by Palestinians frustrated by the power imbalance and the loss of land they consider rightfully theirs. The Israeli army is tasked with maintaining control in the West Bank and armies aren’t good at being police. During uprisings referred to as “Intifadas,” young Palestinians attacked soldiers and civilians with stones, molotov cocktails, knives, and even suicide bombs on a regular basis, and soldiers responded with beatings, rubber bullets, and live fire at times. People on both sides died, more Palestinians than Israelis. 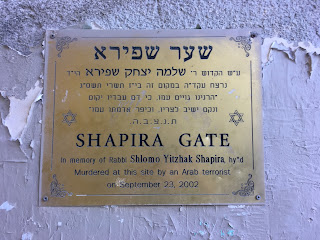 Many Israelis view the West Bank as an area that should be part of Israel proper because it is part of the biblical lands of Judea and Samaria that Jews once controlled. Hebron is believed to contain the burial plots of the patriarchs of Judaism; Abraham, Isaac, and Jacob, and their wives (except Rachel, thought to be buried in Bethlehem), and in fact part of our tour was of the mosque/synagogue (called Ibrahim Mosque by Muslims and Cave of the Patriarchs by Jews) now partitioned and guarded by Israeli soldiers after it was a scene of mass shooting by a radical Jew, Baruch Goldstein, in 1994, which killed 29 Muslim worshippers and wounded well over 100.

To our Palestinian guide, Lena, this murderous rampage and its aftermath, which was followed by months of martial law and the eventual partition of the historic mosque/synagogue and the city itself, is a grievous example of Israel’s disrespect and dictatorial treatment of Palestinians. 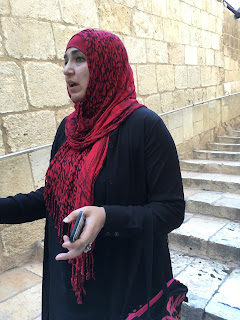 Between 1929 and the 1967 6 Day War, Jews had been banned from entering the building. The historic building, sacred to both Muslims and Jews, was initially built by the Jewish King Herod, and served over the centuries as synagogue, church, and mosque. In a Solomonesque arrangement agreed to in negotiations at Wye River (an agreement never fully implemented) Palestinians now have access to 80% of the building for a Mosque and Jews 20% for a synagogue on all except 24 days of the year during 12 of which Jews can use the whole building for their High Holidays and Muslims are excluded, while during the other 12 only Muslims have access, during Ramadan.

Lena pointed out cameras that monitor activity inside the mosque and complained that one can’t pray as one wishes while being watched.

On the other hand, Eliahu, our Israeli guide, told us about a massacre that occurred in 1929, when members of the Arab community in Hebron killed almost 70 Jewish residents and destroyed homes and synagogues during the British Mandate, after which the British removed all the Jews of Hebron to Jerusalem. There have also been several attacks on Jews in and around the Mosque since they gained access in 1967.

Here’s how Wikipedia describes the situation now: “Hebron has a Palestinian majority, consisting of an estimated 208,750 citizens (2015)[1] and a small Jewish minority, variously numbered between 500 and 800.[2] The H1 sector of Hebron, home to around 170,000 Palestinians, is governed by the Palestinian Authority.[3] H2, which was inhabited by around 30,000 Palestinians is under Israeli military control with an entire brigade in place to protect some 800 Jewish residents living in the old Jewish quarter.[4][5] As of 2015, Israel has declared that special areas of Hebron's old Quarter constitute a closed military zone. Palestinians shops have been forced to close; despite protests Palestinian women are reportedly frisked by men, and residents, who are subjected every day to repeated body searches, must register to obtain special permits to navigate through the 18 military checkpoints Israel has set up in the city center.” 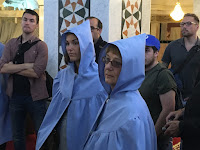 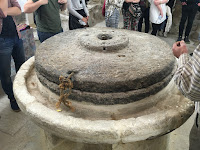 Our tour was in the H2 section only—including through several Palestinian shops that remain open in an ancient market area. After guiding us through the mosque and viewing the tombs of Abraham and Sarah (the women had to don a light blue hooded cloak that reminded us of the cloaks in A Handmaid’s Tale), Lena took us to see a maker of a traditional flat bread, a cheese maker, to a soup kitchen that serves hundreds and sometimes thousands of meals each day. We saw an ancient tahini mill consisting of two wagon wheel size rocks that used to be turned by hitching a camel to the one on top and having it walk in circles in the cavelike room. We were exhorted by a man who serves on a citizen council to post our pictures to Facebook and tell the world about the indignities that Palestinians face when they have to pass through checkpoints. We also saw a demonstration of creating sand art in bottles with different colors of sand and visited a shop selling crafts made by the “Women of Hebron,” an organization dedicated to improving the status of women there. And we were served a delicious lunch by a Palestinian woman and her children in their modest home. 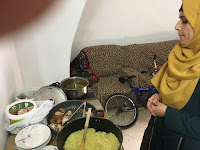 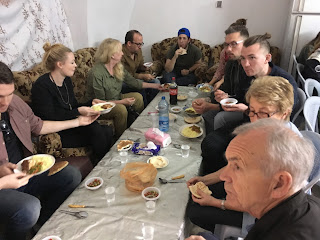 Eliahu kept up a constant monologue of historical timelines colored by his sympathies for the Jewish love of their historic homeland, the archaeological record of the area and reference to the Biblical passages they proved, the record of Jewish populations who had resided in Hebron over the centuries and their impact, all peppered with anecdotes of knife attacks on soldiers or innocent Jews that occurred where we were standing at the moment or in a house we were passing. We visited a synagogue rebuilt in the same place an ancient one stood using the same plans as the one destroyed in the 1929 massacre and restored with two hundred year old Torah’s that had been saved by a 12 year old boy and kept safe in Jerusalem until returned a few years ago to the ark.
He told us the story as we gathered around that ark and added that a man in his 80’s identified himself as that boy when the synagogue was being opened for the first time. He also brought in the former spokesperson for the Hebron settlers, David Wilder, to give his viewpoint. He dismissed any talk of peace as a fantasy. He seemed to be saying the settlers basically hope Israel will annex the West Bank, and when asked if he thought the Arabs living in Hebron should have a vote in Israeli elections in that event, he sidestepped the issue.

The H2 area was quiet with few cars and soldiers stationed not only at checkpoints, but on top of walls, behind bullet proof glass patrol stations, or lounging next to armored vehicles. Behind walls topped with razor wire was what appeared to be a fairly thriving city—the Muslim dominated Palestinian city of Hebron from which a cacophony of Muslim prayers broadcast from many Mosques and echoed through the valley and across the hills a few times during the day. I went in thinking I had a basic understanding of the settler issue and what was needed for peace—security guarantees on both sides, land swaps, those kinds of things. But seeing it up close showed me that I don’t really know much and that it’s complicated. Very complicated.

Posted by Paul Epstein at 6:54 PM No comments: