When the Epstein (Extended) Family Singers took the stage to sing our special tribute to Raya and Michael (during the wedding reception--see part 1 for more description of the wedding), we performed flawlessly, singing strongly and confidently in Hebrew of the love of place that brought Raya and Michael together and that Israelis feel for their homeland. And in English we sang as strongly to the version my brother David translated for me and I revised to fit the melody and express the romance of the occasion: “Open my heart; to love the only one; the only one my heart will take me to.”
There is apparently an old Jewish tradition of which I had never heard that after a wedding the couple should be entertained by various groups every night for a week, each time ending with a fifteen minute recitation of 7 wedding blessings. And so, for the rest of the week, various family and friends gathered for dinner at a restaurant, for Thanksgiving dinner, for a Friday evening Sabbath dinner, for a Saturday brunch after attending a Synagogue service in which representatives of each family read from Torah. Each time the couple was toasted, the party broke into song, speeches and appreciations were made, and hugs passed all around as family members who had not known each other well and families who hadn’t know each other at all got closer.
For someone who is not religious and does not believe in a supreme being (or ghosts or the tooth fairy), I could have been extremely bored or even uncomfortable with all the religiosity. At times, I admit I found it hard to acquiesce to the self-imposed and often quirky limitations their religious practice requires: for instance, you can use an electrical device on the Sabbath, but only if it is already turned on or if someone non-Jewish turns it on or off for you). But you would have to be Scrooge not to appreciate the joy their version of Judaism expresses. All the prayers are sung, and not in a monotone chant. It seems that almost every prayer has a unique melody (or more than one from which they choose), and Rina had even written a new melody to one of the common prayers that their synagogue had adopted. Music has always been an important part of my life—since my early twenties I’ve been playing in bands and writing tunes and songs, so I know the power of music to sooth the soul (I use the term soul secularly J).
During my week in Israel, my wife Rita, daughter Hannah, and I found a little time to be tourists, together or on our own. We took a wonderful guided tour of the City of David, the archaeological site a little outside the “Old City” that constituted the walled city of Jerusalem during the time King David. We also walked and shopped inside the Old City, enjoying the narrow alleyways crammed with small shops selling spices, souvenirs, art, glassware, falafels, and packed with tourists and pilgrims of many religions, monks and bearded Jews in black hats. 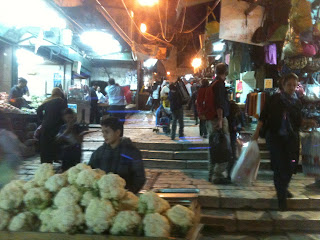 I took a self-guided walk along the parapets of the old city and inside the Tower of David Museum, and one morning we took a quick tour through one of many wings of the Israel Museum, all of which reinforced our knowledge of the archaeological historical record and how it squares with Biblical history (remarkably well, though not completely). Hannah also toured an organic farm, Tent of Nations, owned by a Palestinian working for peace. We also were treated to a wonderful meal in the home of Muslim Palestinian neighbors of my brother, who were extremely hospitable, welcoming, and friendly. The food was simple and very tasty.
The weather was unusually good for November in Jerusalem when it usually rains, so though the locals were concerned about drought, we celebrated clear skies, no humidity, and temperatures reaching almost 80F. The city was wonderful to walk in, so we mostly got our exercise that way, though one morning I went for an 30K bike ride with my brother and two friends into a forest in the Judean Hills. Though the trees, planted over the years mostly through contributions from Jewish children in America, were much sparser than the forests of West Virginia, my home, the views were stunningly beautiful.
I felt safe at all times and found everyone, whether Jewish or Arab, to be friendly and helpful, though sometimes aggressive in their sales pitches. There were soldiers and police in evidence and they carried automatic weapons. They appeared vigilant, yet relaxed. We crossed through a few checkpoints, both permanent and informal, but were waved through quickly. Airport security was thorough, though there were no body scans or pat-downs. Instead, an Israeli security officer asked us a few questions about the purpose of our visit. Our interview lasted only a minute, though I overheard another family whose questioner went deeper, “Do you go to synagogue regularly at home?” she asked. The father seemed confused by the question. “Where do you go to pray?”
“Well, we go to church,” and he named it. She switched gears and asked if he had any explosives. After he assured her he didn’t, she put the all-clear sticker on his luggage.
To my Israeli family I say a huge toda (thank you) for your hospitality and love, and Mazel Tov (congratulations) for your joyful, celebratory, and loving approach to life!
Posted by Paul Epstein at 5:11 PM