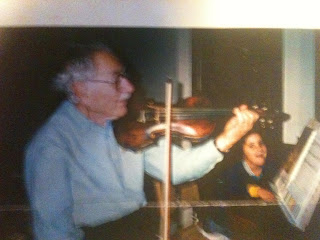 In honor of my father, Josh Epstein on this 16th anniversary of his death on Father's Day weekend, I thought I'd explore some memories.

Josh loved music. He was an earnest violin student as a young man, though he also said that his father used the belt on him at least once when he skipped a violin lesson, and perhaps many other times for other reasons. Josh used the belt on me, too, at least once, but I think not much more than that. I think he was disappointed in himself when he lost his temper, which was a somewhat rare occurrence, though he got angry and raised his voice on a monthly or at times maybe even a weekly basis when my older brother Dave and I were young and without doubt "more than a handful". He and mom also argued quite a bit in those days.

He loved to listen to classical music on the record player. It was not a stereo, but a light blonde wood cabinet, perhaps maple, with a drawer that pulled out, which held the record player, and next to that a door, behind which were the records. The speaker was in the bottom behind a fabric or woven reed covering. It might have been categorized as a 'hi-fi'. He sat in his chair, the same one where he read the newspaper after work, no Lazy Boy for him, a small cushioned chair. I still have that chair, or one very much like it that I got after mom died a few years ago. I don't find it comfortable, I have a big recliner.

Josh leaned his head back and listened to Bach, Beethoven, Hayden, Mozart, (I'm embarrassed to admint I never asked what his favorites were), eyes closed, perhaps his lips pursing occasionally and releasing breath, releasing tension.

He had majored in music in music, in the violin, I think, at either City College of NY or NYU. I'm sure one of my sibs knows. But he washed out, he told me, because he failed the music theory class, maybe more than once. I think he put the violin away for a number years--the war, a master's in Social Work at Columbia, a new career, a family, but he would get it out once in awhile and play. We hated it. He was probably rusty or maybe he just hadn't been all that good--I don't know, all I know is that it always sounded somewhat scratchy, hesitant, and out of tune to me. At some point he started playing regularly with his friend Sid Fox, who would come over to the house and play duets with him. Sid was more precise and in tune than Josh, though I can't say I ever sat at their feet and listened. I probably got as far away as I could--most likely outside.

Dad wasn't a performer and had, I think, no burning need for adulation as some of us, at least David and I, have, regarding music. Dave plays guitar and has a family band in Jerusalem, "The Epstein Family Singers," I'm in a couple bands and perform solo sometimes. Of our two younger siblings, one also plays, but only for his own pleasure. I guess on some level David and I are defined by competition and seeking the attention of our parents. Isn't everyone?

But I think Josh played primarily for the love of the music and community created by playing music with others. In later years, playing in quartets, the community symphony in Bethlehem, PA, serving on the board of the Chamber Music Society, and going away for weekends and even whole weeks to attend music camps where he could play music. He could never play by ear, only by reading music. He had a "tin ear" he said. He could sing (though I can't say I remember his singing voice right now), that is, he could carry a tune, he just couldn't transfer it to his fingers, a flaw in the methods of instruction of the day which were strictly meant to create a musician as a vehicle for the composer. He enjoyed listening to me play, I think, when I began playing fiddle in the '70s, but I, even in the late 80's and 90's, could barely read music for violin from the page, having learned violin entirely by ear. I recall once sitting down and playing a duet with him--maybe even Sid was there and it was a trio piece--it must have been a fairly easy piece, but I had a hard time with it and no doubt sounded worse than he sounded to me when I was a kid. It is only in the last few years that I'm beginning to read simple violin music fluently and get somewhat comfortable playing notes "up the neck" never having studied violin or put in the long hours of practice with scales and exercises that classical players do.

Like Dad, I get a lot of pleasure out of playing music with others, without an audience. The adrenaline of public performance is a different pleasure. I wish I could get together with Dad and play a duet. It's strange to have that thought, and not so much miss him, but miss the possibilities that might exist if he were here and in good health.

And here's a song I wrote and sang in a concert at the WV Culture Center last year on Father's Day weekend: http://youtu.be/ERK7J5AATPc