PLEASE GO TO UPDATED VERSION OF THIS POST HERE 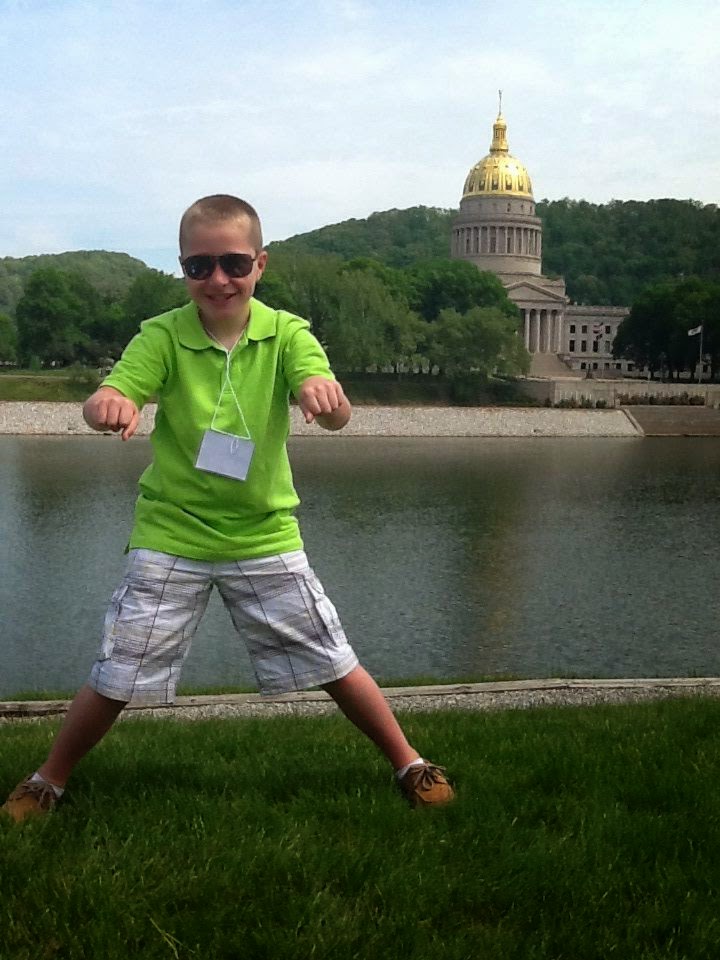 Friday, May 9 was West Virginia Young Writers Day, as Director of the Central WV Writing Project (CWVWP), I was in charge of the WV Young Writers Contest and the celebration day. The Governor had signed a proclamation proclaiming Young Writers Day statewide (I had sent his office the ‘whereas’ section of the proclamation). It was read from the stage of the University of Charleston (WV), a small institution on the bank of the Kanawha River opposite the WV State Capitol, by Madame Secretary of Education and the Arts Kay Goodwin, followed by a few remarks from the Superintendent of Schools for the state of WV, Dr. James B. Phares. After a morning keynote speech and a couple songs by the editor of Goldenseal Magazine and award winning songwriter, John Lilly, who talked about his writing life and the need to write honestly, the students attended workshops with regional authors of children's literature Belinda Anderson, Marie Godby, and Cheryl Ware. The high school seniors had a writing workshop with Lilly, the teachers with writer and publisher Cat Pleska, and the families an activity with Dr. Elizabeth Campbell of Marshall University South Charleston campus, where CWVWP is housed.

After lunch, nearly 200 students from grades 1-12 who were winners in their divisions at the county level made a grand procession into the theater to the applause of about 450 family members and teachers. The six first place winners, five girls and a third grade boy, came to the stage and sat in chairs behind the lectern. They would read their stories aloud and receive medals and cash awards before all two hundred of the county winner were called to the stage to receive certificates and shake my hand as we smiled for the cameras.

I looked over the crowd and began speaking, "Isn’t it wonderful to see these young writers receive applause for the achievement of communicating their ideas in writing. The stereotypical writer toils in isolation, struggling silently and often fearing rejection from fickle readers, publishers who are concerned about making money, and demanding critics, yet writing does not have to be that way. Reading and writing take us outside ourselves to other times and places, take us inside ourselves to ponder life’s meaning; they can help us understand the world and ourselves. I don’t know how these students were encouraged to write their stories and essays, but in a few moments you are going to hear a tale of a magical house,  a humorous yarn about secret agent squirrels, a beautifully descriptive and poignant piece about a West Virginian’s sorrowful goodbye to her mountain home, an experience many West Virginian’s have shared. You will be taken back in time to one of humanities’ worst periods, during the 2nd World War, and into the tortured mind of a Jewish man, a father, suffering persecution during the Holocaust. The winner of the 11th -12th grade division will read her essay that attempts, no succeeds, in explaining something fundamental about the purpose of life, despite the acknowledgement that we inevitably grow old and die, if we live long enough.

"Perhaps the most remarkable of all the pieces you will hear today is one written by a very special young man from Mingo County, Sawyer Hinton. Sawyer is autistic, and I am breaking no confidence in telling you that, because Sawyer takes you inside his mind in his writing, a place where he spends much of his time, and after reading Sawyer’s description of what it is like to live with autism, I had a new understanding and appreciation of this condition, and you will too.

"As I said, I don’t know how these students came to be such fine writers, how all of you who won your school and county contests were encouraged to become writers. But I hope that it was a joyful experience, not a lonely one. Great teachers of writing are able to create a community of writers in their classrooms, communities that will encourage all students to express themselves honestly and creatively, no matter their skill level, no matter their intelligence, no matter their abilities or their struggles, and in that community everyone will feel valued and encouraged and will be willing to do the hard work of writing, rewriting, revising, and polishing their work until it shines. And that great teacher will then make sure the work is read by others and listened to, because the act of writing is an act of communication, and the great teacher will make sure that every student hears the applause they deserve, as you heard the applause today. And now, before we hear from our first place winners, how about if we give a round of applause to all the teachers and families who encouraged our young writers….Thank you."

The winner of the grades 1-2 division was cute and did very well reading her  fantasy about a magic house. And then Sawyer Hinton, the third grade statewide winner of the grade 3-4 contest, from Mingo County, one of the poorest counties in the nation, got up to read his award winning piece. I announced, “The1st place winner in grades 3-4 division is Sawyer Hinton, 3rd grade. He goes to Lenore PreK-8 in Mingo County. The title of his essay is “Superhero Without a Cape.” His teacher is Peggy Hannah. Sawyer approached the microphone and read,

“Did you know that not all superheroes wear a cape?  I have a superpower that makes me very special.  I am completely different from every other 8 year old that I know.  The thing that I call my super power is what most people call Autism. I know that it is normally seen as a disability. But I look at it in a different light. I would much rather call it a special ability. Autism allows me to process everything in the world around me differently than the average child. My family has helped me cope with my diagnosis. So hopefully after reading my story, you will discover that there are superheroes all around you. They just don’t wear capes.

I have been called some really ugly names for being different. But being peculiar is just who I am.  I want to explain how you could always turn a disability into a superpower by just looking at things in a different way. Take my obsessiveness of order routine for example.  Most people consider that a disability.  I, on the other hand, just think that I am more organized than everyone else.  Now doesn’t that sound more positive by just changing the words? I prefer to be alone most of the time. But I really have more time to think, read and dream.  I come around people in my own time and at my own pace. Is that not how most people get to know one another? I just take a little longer. My brain is larger than normal. Seems to me that is a positive trait. I have room to learn more.  One of the stigmas placed on people like me is that we are mentally retarded. That could not be farther from the truth. I am a genius when it comes to certain things. Putting what I know on the outside is what I struggle with. However, the ability to retain information by just hearing or reading it once is definitely a perk.  So, has it become more apparent that I am super special?  I cannot bear the thought of certain textures, smells, tastes and things that have to do with sensory perception. Guess I am just set in my ways. But isn’t every single person that way? I am a little extreme but still not disabled.

I have not mentioned all the quirky things that I do. But what superhero reveals all his secrets?  I just hope that I can make a difference to someone else like me.  I urge you to take the time to look at the things that make you different and embrace them. Never accept something as a disability, look at it as a special superpower that makes you unique! Hopefully now you can see the superheroes living all around you."

The audience erupted in strong applause, which built and built. People began to stand and the applause continued. I stood behind the lectern and watched as the whole audience began to rise to their feet. Tears come to my eyes as I recount this moment, probably the most powerful moment of my teaching career. This is what it's all about, I thought. This is what it's all about.

I've been e-mailing the parents and learned they took video. I hope to have it soon. I warned the father that putting this out on the web might change their lives, that, it's possible that if the story got big, for awhile he and his wife might become parents similar to those who travel around with a child who is a sports star, an actor or beauty contestant, and the father wrote this,  "It was an amazing experience! Thank you all for acknowledging how difficult it was to share something so personal. Writing and sharing it was hard but it was also an avenue of escape and release for him. He said even if he helps one child like him then it was worth it."