First Book for a First Grader

Writing an Alphabet Book: fast acting medicine for a first grader
Paul Epstein, co-director, Central West Virginia Writing Project
pepstein@access.k12.wv.us
In September of 2001 some terrible events took place that we will never forget.  But in the midst of those tragedies, I experienced something miraculous I will never forget.  For only the second time in my 15-year teaching career, I helped a child take the first steps toward reading (Epstein, 1992) I had taught many children to multiply and divide, to write with more detail, enthusiasm or organization, to read more critically or carefully, to appreciate history or science (or at least to appreciate what they had to do to pass), but in my years teaching 3rd-6th grade I never had the experience so many primary teachers have had: watching a child take the steps that would move them from a ‘make believe reader’ to a reader.
Having moved from the intermediate classroom to a position as Title I Reading teacher, I was working one on one with a first grade student who was having difficulty.  If you have not been in an elementary school for many years, you may wonder how a first grader can be having difficulty in the first months of first grade; after all, don’t kids learn to read during the first grade year?  Yes, and no.  These days, kindergarten is not only supposed to prepare students for reading, but send them to first grade already reading their alphabet, knowing the sounds most letters make individually and in combination (phonics), and recognizing several sight words, common words that are recognized instantaneously and may not follow phonics rules.  In first grade, they begin reading, writing, and spelling new words in predictable books from day one.
Jennifer entered first grade not able to identify all of her alphabet (could not identify 6 letters: b, d, g, j, k, u ), had very few letter/sound associations, and recognized only three sight words from the basic sight word list (I, it, in).  Her “reading” of leveled passages indicated that she could often guess at the meaning of words and phrases using picture clues and attending to patterns in language. In assessing her skill level, I found her to be verbal and active, and confirmed what her kindergarten teacher told me, “She likes to have things her own way” (Jennifer was not always compliant, and it frequently required all my skill and some negotiation to keep her engaged in activities).  As a newly certified reading specialist, I was interested in applying some of the techniques in which I’d been trained, but also to apply some “writing to read” strategies I’d been exposed to by kindergarten and first grade teachers working with the Central West Virginia Writing Project.


Starting out, I knew I would have to work at the letter and word level, making sure that Jennifer could identify all the letters before she could begin to tackle some of the books written for emergent readers.  I decided to start by letting her choose from groups of pictures representing initial consonant sounds I copied from the appendices of Words Their Way: Word Study for Phonics, Vocabulary, and Spelling Instruction, 2nd ed. (Bear,Templeton,). 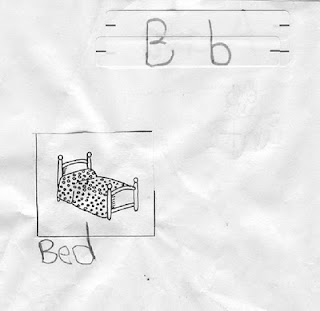 Though the pictures were designed to be sorted by students by initial consonant sound, I asked Jennifer to choose a picture from the eight or so representing the letter “B”. She looked carefully at the pictures, taking the sheet from me, and chose one showing a child’s bed.  I let her cut it out and we pasted it into a personalized Alphabet Book (a 3 hole pocket folder with a page for each letter).  I had already labeled the page with a capital and lower case “B”, and now asked her to write the word bed, making the sounds and supplying her with the letters, sometimes writing them to the side for her to copy.  For additional practice in letter and phonemic identification we went through a process I called “say it, spell it, sound it, blend it”, which sounded like this, “bed, bee-ee-dee, buh-eh-duh, beeeeed” all the while pointing at each letter. I had to hold her finger under each letter and insist she track with her eyes—she knew that her memory was more reliable when her eyes were shut or looking off into space, yet I wanted her to “read” the letters and the word rather than memorize.  Jennifer had to mimic me several times before she could accomplish this task.
Next, I asked her to “make up a short story about the bed.”  She needed little prompting to come up with a sentence she found very humorous, “I saw a ghost sleeping in my bed,” which with my assistance she wrote in the lines beneath.  Finally, we “read” the story together a couple times.  At the end of our first session, she picked up her folder (I told her it was a ‘book’ and she was the ‘author’), looked at me excitedly and asked, “Can I take my book back to my room and read it to my teacher?”  Though I knew reading these sentences would be a big jump for a student who as yet could not identify all her letters, I was also aware that in her classroom they would be plowing ahead with reading at a rate that would leave her far behind if she didn’t make extraordinary progress.  Her teacher reported that Jennifer was very proud of her book, and loved the opportunity to display it and read it to the other students (who often had to help her remember what she had written). This became the first book that Jennifer could read, and she proudly took it to class after each session to read to her classmates.

In each 20-minute daily session for the first two weeks  Jennifer chose pictures for two or three letters, pasted them in the book, and wrote sentences to go with them. She was gaining control of her alphabet and making more and more letter/sound associations.  Since the stories she provided often contained words that she could not have begun to spell correctly, like ghost and elephant, Jennifer was exposed to a wide variety of phonetic structures, rather than only the very regular structures contained in the early stages of most phonics programs.  While I always asked her to attempt to supply a letter to match the sound she heard in the word she was trying to spell, I did not have her write the words using approximate or invented spelling, instead praising her for her effort and providing her with the standard spelling.  This led us into many discussions of how “silly and tricky” the English language is.
After only three weeks, Jennifer could identify all of her letters, had control of most of her consonant sounds, and began to understand the role of vowels in words.  As I moved Jennifer into the reading of leveled books and work with word sorts (Clay,1993, Gillet & Temple, 2000, Bear, et al., 1999), activities around which most of the training I received in remediation of reading difficulties revolved, I continued to work with her on writing in and reading from her journal in response to each book we read or to practice a spelling pattern.  Jennifer always looked forward to the part of the lesson when she had control of what was read and written—when she got to write the story.   The connection between writing and reading has never been clearer in my mind.  I can now say from experience that composition is a powerful tool in reading development for emergent readers.
note: Though Jennifer made great progress during her first grade year, she lagged far behind the others in both reading and math and teachers decided to give her another year in first grade.  At the end of her second year in first grade she is a confident reader and an expressive writer.  While not by any means at the top of her class, she has had a successful year and did not require intervention from a reading specialist. 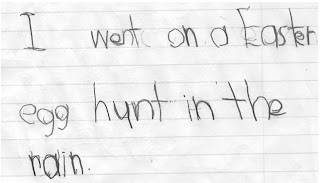 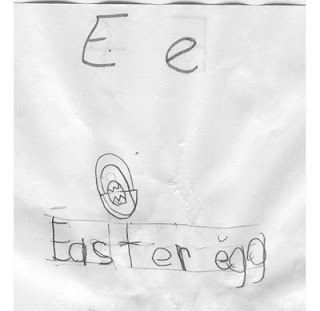 caption: Jennifer didn’t want to use the picture from the book; she wanted to draw her own Easter egg, and she insisted it was “a” Easter egg, not “an” Easter egg.  With Jennifer, you had to pick your arguments carefully!  This was her story, after all.
Bibliography
Bear, D.R., Invernizzi, M., Templeton, S., & Johnston, F.  Words Their Way: Word Study for Phonics, Vocabulary, and Spelling Instruction, 2nd ed. New Jersey: Prentice-Hall, Inc., 1999.
Clay, M. An Observation Survey of Early Literacy Achievement.  Portsmouth NH: Heinemann Education, 1993.
Epstein, Paul. Jerry: A Special Education Student Discovers Writing and Reading. Quarterly of the National Writing Project and the Center for the Study of Writing and Literacy; v14 n4 p8-12 Fall 1992.
Gillet, J.W. and Temple, C. Understanding Reading Problems: Assessment and Instruction, 5th ed. New York: Addison Wesley Longman, 2000
Posted by Paul Epstein at 5:42 PM